Warrnambool Cheese & Butter (WCB) has produced yet another winner for the second year, with its new Sungold Jersey Milk collecting the award for Champion Milk at Dairy Australia's 2013 Australian Grand Dairy Awards (AGDA) in Melbourne yesterday.

Having been a producer of high quality dairy products for 125 years, WCB is proud to again be recognised by the AGDA.

The AGDA was created in 1999 to reward quality, excellence and innovation in Australian dairy products and to recognise the 'best of the best'. A total of 399 of the finest dairy products from around the country were received from 84 businesses for this year's awards.

The award winning Sungold Jersey Milk is collected from only purebred Jersey cows, a heritage breed with naturally superior milk, renowned for its rich creaminess and higher levels of protein and calcium.

These attributes have seen it become a favourite for making coffees as it is richer and creamier than other milks, making it ideal for achieving a silky smooth, velvety finish which is what all discerning baristas strive for in the perfect coffee.

"Consumers have also taken a liking to the delicious flavour and full cream freshness of the milk."

Sungold Jersey Milk is collected exclusively from a group of pure Jersey farms, located in South West Victoria. Currently WCB works with several family owned and operated Jersey farms, but with the growing popularity of the milk, launched just 14 months ago, WCB is now recruiting more Jersey farms to add to its program. 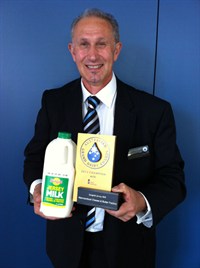