SUNGOLD MILK is produced from cows grazing the lush pastures of the coastal province in Australia known as South West Victoria.  This is a rural area where agriculture has persisted since colonial times.  Free of major cities, this clean and green countryside, with high natural rainfall (32 inches or more per annum) in a mild temperate zone, has the ideal conditions for premium milk production.

The first European explorers to this region in the late 1830s were quick to identify the fertile volcanic plains and lush grazing land, and it was not long before pioneers set up large cattle and sheep stations.  Agriculture became the backbone to the birth of towns and trade routes in the region.

Dairy farms were typically established on smaller land holdings close to the towns.  These dairy farming families would milk a small herd of cows and churn butter by hand for their own consumption, then sell any spare butter to local stores. Butter-making was a home affair.  Early pioneers included migrants who brought with them dairy skills and knowledge from Europe, such as the Irish farmers who migrated during the 1850s following the great potato famine.

As these dairy farmers obtained more land and their herds and production grew, contractors were required to take surplus butter further afield for sale.  Product quality over time and greater distances became an increasing challenge, so did producing butter by individual families on an increasing scale.  This led to local businessmen and farmers establishing butter factories, the first two in the district being the Cobden Butter Factory and the Warrnambool Cheese & Butter Factory, both formed in 1888. 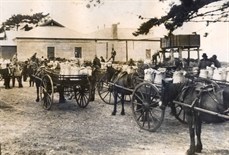 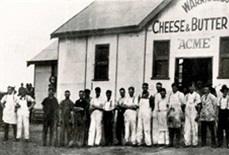 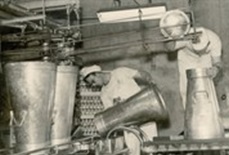 Many other factories and creameries soon followed providing dairy farmers with large mechanised butter making facilities, centralised transport and marketing of their produce.  Dairy farmers would deliver their milk in milk cans by horse and cart to the closest butter factory or creamery.  These processing centres became a social hub as farmers shared local news, sporting views and stories while waiting for their milk to be weighed and loaded, and their milk cans washed before the drive home.

The dairy industry would go through many technological advances, such as refrigeration, that significantly boosted growth. Following the second World War the Victorian government developed a large area of land in the south into dairy farms for returning soldiers.  The Heytesbury Soldier Settlement, as it became known, added further to the region's milk supply.

Many of the original dairy processors have disappeared since the pioneer period of the 1800s with the Allansford plant's proximity to some of the best dairy farming land by the Great Ocean Road providing an advantage, along with key business decisions that have allowed it to succeed while holding fast to its identity and heritage.